We’re continuing the interview process with our awesome authors. Azzia Walker, our operations manager, got to know Ada Hoffmann, author of Monsters in My Mind and The Outside, which is coming in June 2019 from Angry Robot Books. 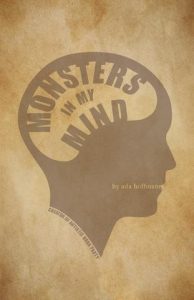 Q. What got you started with MONSTERS IN MY MIND?

A. I started publishing short fiction in 2010, and by 2015-ish I had an amount of it out there that I felt was a book’s worth. I always loved the idea of having a short fiction collection of my own, so I started experimenting with themes that could tie together big chunks of my work and with different ways of arranging the stories and poems.

When Dani Alexis Ryskamp beta read the manuscript for my novel THE OUTSIDE, she offered to publish it. I wanted (and, eventually, got) an agent and a bigger press for the novel, but I had been playing with the collection idea for a while at that point and had been struggling with where to send it, so I asked if we could do that instead. I liked the idea of publishing MONSTERS with a group of neurodivergent publishers who “got” my work.

I actually changed the entire story order for the NeuroQueer Books imprint. I asked myself: how did the stories and poems engage with the idea, literal or metaphorical or subtextual, of being neuroqueer? I knew what stories I wanted to start and end with, and between them I was able to order the works in a way that charted a satisfying path between different ways of engaging with that concept, like a meta-plot.

Q. Was there anything that surprised you about the stories or the characters as you got further in?

A. Not a lot – most of the stories were already polished and published before I assembled them. Even the new ones had already been through beta reading and revisions.

The surprises were mostly to do with how well the stories fitted together. I was surprised how much of my work I could fit into the structure I’d come up with, even if it had nothing to do with neurodiversity at first glance. It also surprised me which stories I ended up dropping. I had a couple of published stories that I think are great stories, and that even engage with neurodiversity and mental illness themes more directly than some of what made it in. But they didn’t fit the meta-plot – they contradicted what I felt like the meta-plot was overall trying to say. So I left them out. Maybe in a future collection!

Q. What do you want people to come away with after experiencing your work?

A. I hope people feel a sense of wonder. I want them to feel that they experienced some image or idea that was new to them, that their mind expanded a little bit, or that they’ve seen something from a different perspective. I also want them to be able to engage their emotions and have fun!

My debut novel, THE OUTSIDE, is coming out in June from Angry Robot Books. It’s a space opera with elements of cosmic horror, featuring an #ownvoices autistic protagonist and other diverse, non-neurotypical characters. It’s also a queer book – the protagonist is a lesbian and her supportive girlfriend is a major character. There are very few straight characters, actually. I’m watching the buzz build and I’m VERY excited.

I’ve been struggling with burnout after finishing my PhD thesis, so I haven’t written as much new work as I’d like, but short fiction and poetry will always be there in some form. I have lots of ideas for THE OUTSIDE’s potential sequel, though it won’t be greenlit until we see how the first book does, and I have the beginnings of an unrelated novel involving dragons.

I also am continuing my Autistic Book Party project, a long-running review series that talks in depth about representations of autism in speculative fiction. Autistic Book Party is funded through Patreon; the reviews are free for everyone, but backers help choose which books are reviewed, along with some other goodies. If that’s of interest, you can check it out at https://www.patreon.com/ada_hoffmann.