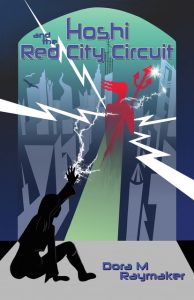 Azzia Walker, our new Operations Manager, had the great pleasure of interviewing Dora Raymaker, author of Hoshi and the Red City Circuit. Dora is a fabulous person to know and we recommend checking out more of her work.

Who do you want reading your books?

Most urgently, people like me. There are so few neurodivergent characters in literature–and of them, rarely are they heroes–and of those heroes, rarely are they portrayed outside of stereotypes. Rarely do they include the realities of our lives either, like the perils (and privileges) of passing, or the constant fight for person-ness and inclusion. I tell stories I want to read. I want them read by other people who wish, as I do, for realistic neurodivergent heroes, and for themes that trouble existing disability realities and narratives.

But also, I want my books read by everyone who enjoys literary science fiction and a weird, fun romp through cyber-fueled speculative worlds! I’m not playing to the mainstream, but that doesn’t mean it wouldn’t be excellent to have broader readership.

What was your favorite scene to write?

Definitely the chase scene that happens about mid-way through the book. I love writing action scenes, particularly chase scenes. Sometimes I act them out. That one was extra-fun because it gave me a chance to run through a lot of Red City, and I really enjoy walking through the streets of that setting and experiencing it with Hoshi. During the scene, I had to both get Hoshi from one physical location to another, and bring her from baseline to total mental and physical exhaustion. So it was a fun writing craftsmanship challenge too.

What scene was the hardest to write, and why?

I wrote this story so long ago, I’m not totally sure anymore–the position of “hardest scene ever” is seared into my current memory as a particular scene from a different novel. For Hoshi though, possibly the Claudia’s apartment scene, which in the final book is scattered throughout the story but was originally one scene. That was structurally difficult–where to put what information and when? The other possible contender is the scene where Hoshi confronts the murderer, which remains the one part of the book I’m still not totally happy with. As to why that scene was hard, it’s because I feel like I never quite got grounded on the character of the murderer. It was “good enough” for the story, but not solid enough for me write without struggle.

What feeling do you want people to come away with?

Satisfaction at a story well-told, coupled with disappointment that it’s over and a desire for more stories with these characters, or in this world, or by me as an author. I want that feeling that I get when I read a good book, and turning the last page is a bitter-sweet sigh of satisfaction and yearning for more.

Tell us something that we wouldn’t guess about you.

When I was 17 I ran away from home with a friend. We made it all the way from Maine to Western Saskatchewan, and then back down into Eastern Montana, a distance of nearly 3,000 miles. That’s maybe guessable to anyone who knew me at the time, plus or minus some details, but the reason I was found was because a psychic who was sometimes used by the police back in Maine told my parents the name of a town which happened to be in the same area where the police picked us up. The Montana police would unlikely to have been on the lookout for us otherwise, and we’d have slipped away. So, yes, I was located by a police psychic. I was an actual X-File.